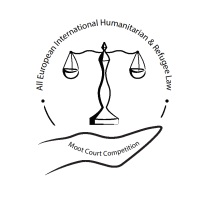 The Faculty of Law of the University of Ljubljana organised the 2nd edition of the All-European International Humanitarian and Refugee Law Moot Court Competition from 21 – 25 November 2017.

-  Faculty of Law, University of Ljubljana,
-  Constitutional Court of the Republic of Slovenia (Final Round).

The preliminary phase of the Competition involved simulations of meetings between the parties to the conflict and various international organisations, as well as between other State and non-State actors. In this stage, competitors addressed topical issues in the field of international humanitarian law, e.g. nature of an armed conflict in the event of a proxy war and legality of the use of particular weaponry, and international refugee law, e.g. legality of the closure of borders and refugee status in the event of a civil war.

The Runner-Up Team: University of Belgrade

The Best Oralist of the Preliminary Rounds: Martyna Kasperska (University of Silesia)

The Best Oralist of the Final Round: Revaz Tkemaladze (Javakhishvili Tbilisi State University)

The organisation of the Competition would not be possible without the support of the International Committee of the Red Cross, the United Nations High Commissioner for Refugees, the Embassy of Switzerland in Slovenia, and the Slovenian Red Cross.